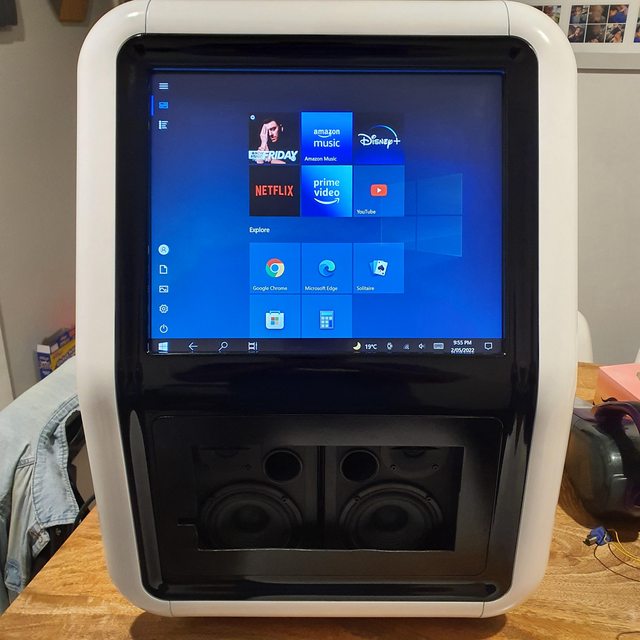 I purchased this photo kiosk almost 2 years ago with plans of doing a touch screen jukebox for the other half and of course, more projects happened during that time and this one always got pushed back. As of the last couple of weeks, I’ve pushed through and tried to get this one across the line as the “tinkering” itch needed to be scratched

There was no way, this was going to be in any living spaces as it is, so it had to be painted.

After a couple of weeks, we’ve ended up with a Panda themed colour scheme

Next up were the internals. I decided to go Edifier R1280DBS as they fit perfectly (accordingly to my measurements – but I’m always weary about that). Reviews were good on the speakers, I have another set of Edifiers for my desk and was very happy. They were reasonably priced and also supported bluetooth for when people just want to connect in themselves.

I had a spare NUC (really old celeron one) and thought I could use it – but after trying to install windows and having a muck around with it, I just didn’t like the way it ran, fortunately, I had a spare micro pc with an i5 6500t and SSD which made a world of difference.

Of course, there’s always a rats nest when it comes to these things

And I mean everything

Cut out the metal plate, gave it a quick paint and this is what it looks like as an interim until I buy some speaker cloth to cover this area.

I’d still be happy to have a localised collection for tracks that aren’t on spotify.

It’s a bit bright for my liking, but we’ll see how it is in real world applications..